The following are samples of pics taken at the Association of Related Churches, church planting conference called "All Access 2010". It was held in April at The Healing Place Church, Baton Rouge, Louisiana. 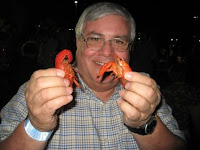 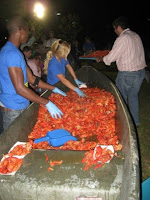 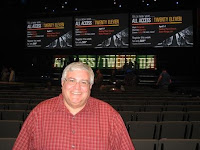 These guys were part of my "crew". L-R, Zoran and Thomas
from Sweden and Rande from Germany, all pastors.

Overall it was a great event. With lots of terrific people wanting to build the Kingdom of God.

Posted by Lawrence Blakeslee at 03:10 0 comments

Thought I'd do I quick update since I can't sleep and not sure when I will have time to get back to my blog for a couple of weeks.

Baton Rouge / Church Planting Conference
I just returned to Bonn last Saturday from a terrific short trip to the States. If your my Friend on Facebook you saw pics from the Association of Related Churches / All Access Church Planters conference in Baton Rouge. I promise to try to post some of them here soon.

In Jacksonville
After the All Access meeting I was off to see my son Shawn and granddaughter Antonella in Jacksonville. While there I connected with the 103rd Street Church of God church located there. They have a terrific men's group led by Cliff Hare. I love working with all kinds of denominations.

Back to Phoenix
From there it was back to Phoenix to minister at a gathering of house churches to talk about what was happening here in Europe. This associated group of home churches all met in one location so I could up date them at one time. Sunday morning I drove up to Word of Life Assembly of God Church in Chino Valley, Arizona to minister at their children's church about being a missionary in Germany. It was all great fun. I brought the kids some German candies that they loved (and so do I).

Back to Phoenix with a stop off to my friends Nathan and Deborah Hale to see their brand new, one month old, baby boy Judah. How cute was he.

I was only in Phoenix a week before returning to Germany. Guess I didn't want to wear out my welcome with Mark and Bonnie McKibben. Bless their hearts, they have allowed me to stay with them at their Scottsdale home for the last few years. They just "got rid" of me the month before when I surprised them with a quick return. Anyway, thanks Mark and Bonnie for letting me feel like I'm home when I stay with you.

Upcoming Ministry in the Baltics
Friday morning, I'm off again for the next two weeks to Hamburg, Germany, Tallin, Estonia, Riga, Latvia and Klaipeda, Lithuania. I'm connecting with Paul Cole of the Christian Men's Network in Hamburg to minister to the men in those countries. I'll try to post some pics as I travel but I'm not sure about access to the Internet during the trip.

Will keep you posted.

Posted by Lawrence Blakeslee at 02:23 0 comments

The Icelandic volcano caused all kinds of chaos in Europe. It caused the cancellation of the Christian Men's Network Meetings on Thursday since no one was able to fly anywhere in Europe. My Thursday morning flight from Bonn was canceled Wednesday night but I found an early Friday morning flight on different airline.

Paul Cole who came from the U.S. had to be driven from the CMN Aachen, Belgium meetings to the mid-week meetings in Budapest, Hungry. He and his wife Judi were stuck in Budapest. Getting to Helsinki was impossible and getting stuck there, out of the question. They finally drove for 18 hours to Amsterdam on the hope they would be able to return to the U.S. for his meetings there.

The other team members, Daniel Kawku and Fred Fredricks could not fly from London to Helsinki. They finally arrived late Friday night and feeling good that they could get any flight out.

No one will forget those weeks when people were stuck in airports and the trains and ferries completely full. Rental cars were all sold out and on the roads trying to get their occupants to their destinations. But it was all worth the extra effort to get to minister to the people of Finland.

This was my first visit to Finland and the beginning of many trips in the future. The Finnish people were incredible to me. There was an instant spiritual connection. Making a direct connection to the Finnish men will help me in writing future articles for the Tosimies-Lehti Christian Men's Magazine. www.tosimies-lehti.fi

I've been invited by a local pastor to return in September and preach at his church plus it looks like we'll also have another Christian Men's Meeting while I am there. I'm looking forward to my return.

Our first meeting on Friday evening was at a beautiful downtown Helsinki Lutheran church built in 1826.

Meeting with my translator before the meeting.

The following are pics from the Christian Men's Network meetings on Saturday and Sunday. Saturday's all day meeting was at Mission Church, a Helsinki inter-city church. The Sunday services were in a nearby city of Nurmijärvi at a local Pentecostal church.