Yesterday my youngest son William was in a Winter Haven, Florida 7-11 Store, getting a soda. A local police officer was also getting a soda when some guy, apparently mentally unstable and without notice or provocation, jumped the police officer near my son. The attacker was able to land repeated blows to the officer's head as they got into a scuffle.

My son saw, assessed the situation and realized that the officer was having problems getting control of the attacker as he repeated hit the police officer’s head.

William, is currently a crewman on the Coast Guard Search and Rescue helicopters. Prior to his assignment at USCG Air Station Clearwater, he received extensive drug interdiction and ship boarding training when he first served on the USCG Cutter Alert in Astoria, Oregon.

Shortly, another police officer ran in the 7-11 store from outside. The second officer was able to Taser the attacker as all three men wrestled with the attacker.

Of course I am very proud of my son for coming to the immediate aid of the Winter Haven Officer. He had to make an instant choice of either getting involved or not. William did get involved without thought of his personal safety even as others in the store did not.

Not only do I feel strongly about my son’s actions but his action also reflects the heart and purpose of the U.S. Coast Guard. The tremendous training, skills, and confidence the Coast Guard instills in its young men and women  reflects their selfless desire to aid and assist beyond what is “expected” of them.

I truly believe that the Coast Guard helped give my son the confidence and the skills to step in and help out in this possibly life saving situation. Yes, this mission was not at sea or in the air but it accurately reflects the Coast Guards Air Station Clearwater Mission statement: “Anytime  — Anywhere” .

William’s actions also reflect a new generation of young men and women, in all branches of the military, who are the hope of America's future.

Thank you Lord for watching out and protecting everyone. Thank God and thank those who put their lives "on-the-line" everyday for our protection here and abroad.

Posted by Lawrence Blakeslee at 22:54 1 comments

C3 Geneva / Geneva, Switzerland
This month has been incredibly busy starting off with a short visit with my friends Narii and Nicole Dauphin and their children. They pastor a C3 Church in Geneva, Switzerland. It has been three years since I have been there. Their church is growing at a steady rate and having an impact on Geneva. God's got great things planned for them.

Time of Refreshing (TOR) / Leysin, Switzerland
TOR is a three day meeting of mostly American missionaries in the Swiss village of Leysin. Held the first week in September, it is located right in the middle of the French speaking part of Swiss Alps. The surrounding mountains are beautiful. It reflects all of God's creative ability.

This invitation only meeting has been a blessing to American missionaries for over twenty years. Bill and Imogene Kaiser have led these meetings the entire time. The Kaiser's raise money in America to make this conference totally free for the attendees. All the missionaries have to do is show up. It is blessing to renew old friendships and make new friends every year. 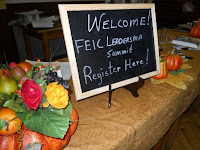 With one week in between the Switzerland trip and I was off to the FEIC Pastor's Summit meeting in mountains of Gutenstein, Austria. These meetings bring together Assembly of God pastors that have International churches located throughout Europe. International churches cater to multi-cultural ethic groups utilizing the same facility but in their own language and service. 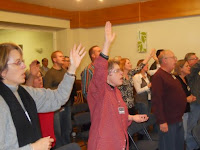 Pastors from different parts of the U.S. came to share on organization, strategy in reaching the lost, the next generation and praise and worship. Since the group was small, about sixty total, it gave us all a chance to interact and connect with everyone.

The beauty of nature surroundings both the TOR and FEIC Summit meeting are always incredible. The Fall colors were in full force especially at Gutenstein. Someday I'm going to have enough time to just shoot pics of the entire area to share with you. In the mean time, you get the idea here with the ones I've posted.

You may remember last year we got hit with an early snow storm. It dropped about eight inches over two days. There was a real concern for being able to get off the mountain top. When I woke up Thursday morning, guess what? Yes, it was snowing wet, gloppy snow flakes. It motivated me to pack the car fast, grab some tea and get off the mountain especially since I didn't have snow tires on my car.

As it turned out, the snow storm was centered on the very top of the mountain. Thirty minutes drive later I was out of the snow and in a bright shinning sun reflecting the incredible Fall colors. Oh well, better safe than sorry especially up on those mountainside roads.

First Europe Advance Church Plant
Last Sunday, we celebrated our first Europe Advance church plant in Frieburg, Germany. It looks like it was very successful for the area. They had over one hundred people attend the first service. We're believing that this is the first of many to come throughout Europe.

Posted by Lawrence Blakeslee at 15:31 0 comments

Europe Advance is putting on another Church Planter's Roundtable in Braunschweig, Germany on 28-29 October.

Pastor Greg Surratt from Seacoast Church, Mount Pleasant, South Carolina will be our guest trainer for this roundtable.

If you would like to know more about how to plant a church, attending the seminar will provide you with some great info.

You can download a CPR brochure with all the details here: http://bit.ly/d6XeUK

Or you can check out the Europe Advance website here: www.europeadvance.org


Looking forward to seeing you in Braunschweig.

Posted by Lawrence Blakeslee at 14:32 0 comments