The World IS Flat!

The world IS flat and you thought that I fell off — well that is pretty close. Today, I realized it has been nearly a month since I’ve posted anything. Sorry, but I do have a good excuse.

The two months in the States was non-stop, with a real push the last two weeks in Phoenix. The time spent with my sons, Shawn and William, William’s wife Stephanie and grand kids was priceless. Sorry boys but new grandbaby Bradley and grand daughter Antonella learning to speak German were at the top of the chart. We all needed the extra time together this year.

Dodged a Bullet
Remember the grounding and canceling of all flights using the MD-80 planes of Delta, American and Southwest Airlines? By the grace of God, I flew the day before that all happened and it was on a Delta MD-80 from Charlotte to Atlanta. This could have been a real problem for me. God is good.

Tick, Tock, Tick, Tock
In a previous post, I mentioned looking forward to a men's retreat near Prescott, Arizona and expecting some peace and quiet so I could get before The Lord. Well that would have been at a “normal” retreat. The Tres Dias retreat was great but completely different than I expected.

I was blessed to be there and the Holy Spirit ministered to me differently than what I expected. It also gave me the opportunity to minister to some of the other guys that were there. My “immediate” prayer needs were delayed slightly by God’s plan.

With only 11 days left before leaving for Germany, it was non-stop “meet & greet” with as many people possible. It was fun to be able to see as many friends in Phoenix as I did. Granted we didn’t get much time to visit but at least it was something. Thank you for your flexibility in allowing me to drop in on your lives, sometimes with little notice.

Night Owl Flight
My trans-Atlantic flight from Atlanta to Dusseldorf turned out to be a “night owl flight”. On prior flights, I could manage to get about five or six hours sleep out of a ten hour flight. On this one, the ambient cabin lights brighter than “normal”, the "million candle power" big screen TV ran all night, (my cheapy eye covers couldn't keep out the light), the entire plane seemed to be up, talking, or moving around. My normal “jet lag prevention” routine went out the window at 31,000 feet, near Iceland, about four hours into the eight hour trip. It took a full week before I finally got back on schedule from the jet lag and the crazy sleeping patterns.

The German Custom's officers gave me a long second look as wheeled all my stuff through the “Nothing to Declare” lane. I really didn’t have anything to declare but you wouldn’t have guessed it by the load. With the dollar so weak against the Euro, it's a common thing now to fly to the U.S. from Europe and shop, shop, shop till ya drop. German Customs is happy to make the additional revenue from your trans-Atlantic shopping trip. 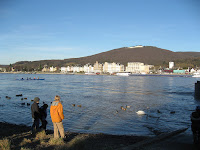 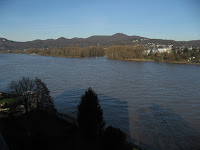 Left: Previously photographed, looking across the Rhein River at Konigswinter, a small town nearby, that used to be the vacation spot for royality, hence the German name for King is "Konig".

Right: A view from my village Rolandseck across to Bad Honef, also a place for vacationing royality in the 1850's and now famous for the manufacturing of Birkenstock sandals and shoes.

God's Beautiful Creation
My German friend, Uwe, picked me up at the airport. He and I jammed my two big maxi-legal airline suitcases, the largest airline legal rolling duffle bag, my computer roller case and briefcase in his little Fiat and shuttled me home to Rolandseck.

Even with a jet lagged brain, there was a moment when the beauty of God’s creation here where I live, struck me. The morning was clear and crisp as we drove down the autobahn. The bright blue sky, puffy white cumulus clouds and morning sun, contrasted the still leaf-less, barren trees of winter in the forest. The evergreens are always "evergreen" but the rest of the trees in the forest looked like a army of skeletons, with arms out stretched, diligently waiting to be covered with "fleshy" leaves. Nothing had begun to bud.

During March, Germany had terrible weather this late in the season. This day visibility was nearly unlimited which can be rare for winter in Germany. Because of the previous weeks of bad weather, the Rhein River was running unusually high, fast and brownish due to the above normal rain runoff.

Honestly, I have never taken for granted the wonderful place God sent me to live and work as a missionary. This has always been appreciated even more after returning from various missions’ trips to Third World countries.

America will always be my home. I would never trade my dark blue U.S. passport for any other country in the world. Somehow God builds in grace for all missionaries to have a “second home” mentality.

The glorious weather disappeared the next day when it all went back to rainy, cloudy, and cold. As I unpack my suitcase, I thought I guess I can pack my shorts and t-shirts away again for awhile. Even my neighbors were complaining about the extended winter when it should be spring.

Finally — It’s Spring
Spring struck yesterday and of course I'd rather be out in it than sitting at my computer working. Don't we all. But the extra light of spring and summer days at this latitude will allow playing outside later. This trip produced a lot of good conversations and exchanged ideas. It’s time to do some praying and research to see what The Lord wants, if any, out of all these ideas floating around.

My plan is to really try and return to Florida a second time to see my sons and grand kids. There is also enough ministry work available in Florida to combine the trip with work and family. I wanted to do it last year but it didn’t work. I believe that it can happen this year. Would you be in prayer agreement with me for this and for this years ministry travel expenses.

In the mean time, it is time to set ministry schedules here in Europe and elsewhere as The Lord would direct and make possible.

2008 promises to be a good year with lots of interesting ministry opportunities and possible changes ahead. Working for God is always an adventure of some sort.

Posted by Lawrence Blakeslee at 16:59 0 comments