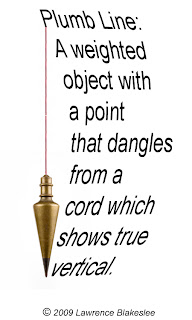 Something struck me when I was at the Adobe Mountain Youth Detention Facility in Phoenix recently. It was the apparent lack of a "plumb line" early in the lives of the young men that were serving time there.

As Christians, our "plumb line" is the Bible. All people, worldwide need something to use as a gauge for excellence or error. These young men are serving time in this detention facility because they either didn't have or ignored the "plumb line" in their lives.

"Robert"
One young man, I will call "Robert" stood out to me. At 15 years old, he told me that all of his family had been or is currently in jail. Since he is a minor, his "error" in judgment got him sentenced to Adobe instead of adult jail or prison. I don't know how "Robert" ended up making his wrong decision but apparently no one in his immediate family had exercised good judgment either, so society "exercised" it for all of them.

There was another young man who had nearly completed his time and was soon to be released and re-enter society. He seemed genuinely concerned that once released, he would not be able to make the correct decisions that would keep him out of jail. You wonder how either "Robert" or this other young man had no foundation for their decisions. I think I have at least a partial answer.

Politically Correct
We live in an era when it is more important to be politically correct than to take a stand for actual moral correctness. Our schools, our politicians and even some Christian denominations are all "gray". Everything except gravity and for now, sports, is "gray". No one is allowed to win or lose... well almost no one.

We talk a good game with our fellow Believers but when it comes to diplomatically challenging unbiblical principles with our friends or the world, we fall short. We know that what we believe is counter-culture to our increasingly permissive society.

We are "told" that we are in the minority and we are shrinking. But what's worse is we are afraid to stand up for what is right based on God's Word, fearing that we might offend someone. We don't need to be offensive but we do need to take a moral stand.

Inch by inch, year by year, we move farther away from what is biblically correct, further into the gray. Are these changes a result of prayer being eliminated from our schools? I think so. I think it has contributed.

Applied Logic
I am really not sorry that I might offend someone by stating my views. Guess you might "offend" a child when you yell at him that the stove is hot and not touch it. After all, is it "our" responsibility? Is it obvious to anyone else that we have got to get our horse-sense back into all levels of this world including politics?

Politically correct or not, we have got to be confident and loving enough to share with the world that there really is a moral anchor available to mankind. Yes, it will probably limit their permissiveness but it is good overall for everyone.

Back To "Robert"
It seems that no one bothered to yell at "Robert" and warn him that the "stove would burn" him. Maybe his family didn't care. Maybe they didn't want to limit his "exploration and development" as a child or teenager. Maybe they were just complacent and wrapped up in their own bad decisions. Never-the-less, "Robert" is now locked up.

Now he spends his teenage days hearing the locks on steel doors controlling his every move. He could have been attending a high school football game, ordering a burger & fries at a fast food joint or being able to "text" his friends. He now hears the guards telling him when to get up, when to go to bed, when to eat and when to take a shower, when to whatever...

On a positive note, the Word is being "planted and watered" in him through a weekly Bible study that he is choosing to attend. The Word promises that it will grow fruit in anyone's life. It is still everyone's choice to spend time reading it and having a relationship with its author, our Heavenly Father by the inspiration of the Holy Spirit. For "Robert"... now he has an honest chance of succeeding.

"Robert" will finish serving his time. Because of the level of his crime and that he was a minor when he offended, he will get a fresh start at life. His family environment certainly does not guarantee his success "outside". Knowing some Bible verses doesn't ensure success but it does start to provide the "plumb line" he was missing earlier in his life.

Like all of us, in various ways, "Robert" has been given another chance. As Christians, our Heavenly Father forgives us and gives us another chance. For Unbelievers, salvation and forgiveness is available to them also.

Mankind's Ultimate "Plumb Line"
There is life after death. Where you spend eternity is your free will choice. But the only way to avoid eternal life in hell is by accepting Jesus Christ as your personal Savior.

The Challenge
Who do you know that is missing a "plumb line" in their life?
Will you love them enough to have the courage to share the answer with them?
Will you take time to pray for them?

Posted by Lawrence Blakeslee at 14:45 3 comments

Sometimes you just love technology and the learning curve it puts us through.

I learned something yesterday. The people that subscribed to my blog got their personal emailed blog posting just like usual. The problem was that finding the video or the link was a challenge because of the way it was posted on my blog site itself.

So, in lieu of any of my faithful subscribers missing out on the opportunity to "Smile" I've posted a direct link to the video below. This ensures that if you have an interest, you will find it. Sorry about that...

If not, you can just go to the Blakeslee Blog itself, as some did yesterday. Where you can't possibly miss it.

I just hope this works or I'll have to go back to the proverbial drawing board.

Posted by Lawrence Blakeslee at 23:04 0 comments

Take 4 minutes out of you busy day and click below to see what happened in the main train station at Antwerp, The Netherlands.

Posted by Lawrence Blakeslee at 13:00 0 comments

Spring Has Sprung
I was delighted to find the forecast for rain and snow, predicted a few days before, did not happen. Wearing my down jacket, I wheeled my piled high luggage trolley outside the airport expecting to get hit with a blast of cold air. I didn't. It was breezy, with the ever present German winter overcast and around 53 degrees. Amazing.

The next morning to my surprise, there was not a cloud in the sky, as the sun blasted bright into my apartment as it rose over the small mountain range across the valley.

The next surprise was to see 56 degrees on my outside thermometer. While I was gone, the Bonn and Germany as a whole had one of the hardest winters. Now in contrast, it looks like spring has sprung... just in time. After months of enjoying short sleeve shirts and shorts, I was grateful I didn't have to bundle up just go to the grocery store to restock my empty kitchen. I had been spoiled with mostly great weather while traveling in the U.S. this year.

The Economy
During my time in America, I saw how the entire country was affected by the poor economy. It was evident that everyone has been hit by it. This resulted in an obvious drop in giving to churches and ministries which have slowed or stopped everyone including me. Churches and ministries, large and small were either laying off staff or returning from the mission field. We always look to the Lord as our source. This has never been truer for everyone right now, missionary or not.

Not Unaffected Here
As I rode my bike to the post office today, I saw a couple of businesses closed. Apparently the poor economy has had an impact on Europe too. My return airline ticket to Germany was the cheapest it has ever been in the seven years I've made the trip. Guess this is due to the overall drop in international travel and tourism in both directions. Still not "cheap", the low price couldn't have come at a better time for me.

Where Are We Going?
I think as this economy continues to take its toll on everyone, Christian or not, people are assessing what's important in their lives and their futures. If the future continues to get tougher, hopefully we will all get closer to God. It is an opportunity to find true solace in His Word and prayer. He is the only one that can provide answers to pending questions about what to do and how to do it. This certainly is the case in my life and ministry.

Pray for me. I'll be praying for you.

Posted by Lawrence Blakeslee at 15:00 0 comments