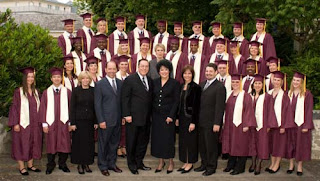 On 20 May, Rhema Bible Training Center - Germany held their graduation ceremony. The event is held every other year. This year it was held for the 2007 and 2008 graduates.

Pastor Ken and Lynette Hagin from Rhema Bible Church and Rhema Bible Training Center, Tulsa, Oklahoma were the commencement speakers and presented the graduates with their diplomas. 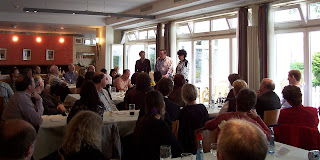 An alumni luncheon was held earlier that afternoon. It was attended by about ninety alumni representing graduates from Europe and America. 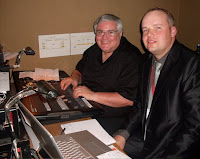 contribution to the ceremony was to help with set up and run the stage lighting system. I am at the lighting board with Brent Harris, who is running the computer graphics. Brent is an American missionary and Rhema Germany staff member.

Posted by Lawrence Blakeslee at 12:16 3 comments

Above Everything Else…
The people of Myanmar (Burma) need our prayers.

A few weeks ago, Cyclone Nargis hit the Irrawaddy Delta Region of Myanmar (Burma). Reuters New agency reported last Monday that the death toll is estimated to be over 130,000 people and climbing.

Myanmar (Burma) is an access and information restricted country run by a military junta. The Burmese government has allowed only a limited amount of international humanitarian aid to come into the country since the cyclone hit on 2nd and 3rd of May.

A worldwide public uproar continues as thousands of tons of multi-national aid waits beyond Myanmar’s borders in ships, planes and helicopters, ready to be delivered. The military junta that has ruled the country for 19 years, has so far refused to allow only a trickle of relief to enter the country.

According to the New York Times on Monday, six U.S. military flights landed on Friday. Which brings the total number of relief flights from all countries to 17. This has increased by today but not by much.

Ships, just off the coast, are holding thousands of tons of supplies waiting for permission from the government to off load. These include three U.S. Navy ships capable of producing 70,000 gallons of fresh water.

Last week, a threat loomed of another cyclone to strike the country on the same storm track as Cyclone Nargis. The storm failed to develop into a cyclone but flooded the already overwhelmed region in torrential rain.

What Can We Do? Pray!
Join me in praying for the people of Myanmar (Burma).

Prayer Points
• Pray for the children and elderly who are not capable of fending for themselves.
• Pray that the military junta will allow the vast multi-national relief agencies to enter Myanmar to help them.
• Pray for the health and safety of the survivors and relief workers as they work in the disease infested region.
• Pray that the people of Myanmar will have an open heart to see God’s love by action by these workers.
• Pray for Myanmar’s Believers to be able to share Jesus’ love for them and the hope He can give them.

What I Saw in January 2007
I’ve been asked if I had visited the area where the cyclone hit when I was in Myanmar last year. No, my time was spent mostly in the highlands and not in the lowlands. The cyclone track looks like the storm was reduced to severe rain in the areas I visited. 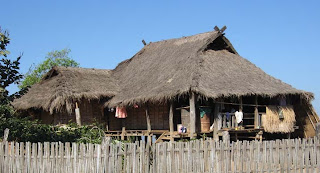 Home construction in rural areas is mostly of thatched roofs and weathered wooden beams would not withstand high winds. Many families live above their livestock. In a cyclone or severe storm, the roads and utilities, would be destroyed and take forever to be rebuild. Relief agencies are already concerned about the lack of equipment to clear roads so they can reach the remaining survivors.

During my trip, I traveled on a narrow, winding, one and half lane wide, mountain road that tracked alongside a small river for a few miles. More than six months before, a severe rain storm washed away a bridge and major portions of this road for a few miles.

As my full sized, overcrowded and standing room only bus traveled on the remaining portion of the road, it was clear that not enough heavy or road building machinery at the job site. What equipment was there was old and worn out. Much of the rebuilding was being done by hand labor. This was going to make rebuilding the road an endless project. 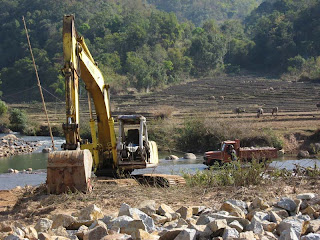 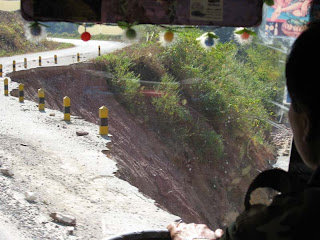 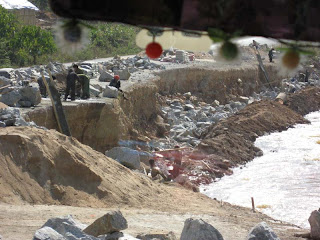 The various people groups and tribes of Burma are a kind and gentle people. The survivors of Cyclone Nargis need food, fresh water and basic relief supplies to save their lives. But they and the rest of their countryman, also need the prayers of all Believers’ throughout the world. They need the hope of The Gospel of Jesus Christ.

Posted by Lawrence Blakeslee at 17:48 0 comments