A couple of weeks ago I returned to Bonn from ministering in the Metro Helsinki area of Finland. I was there for ten days and had the opportunity to minister at seven different meetings. This was my third trip to Finland in a twelve months. Each trip has been more and more productive. God clearly has given me favor with the Finnish people. My meetings ranged from house church meetings, Christian Businessmen Meetings to Sunday morning services.

One of my scheduled "free days" from preaching was spent in a four hour meeting with a couple of local Pentecostal pastors who are considered pretty influential in the Pentecostal circles. They are great guys. We found out that we had mutual friends though out the world which proves again what a small world it really is.

What's interesting to me is that I minister in as many Lutheran churches as Pentecostal churches and I love it. God has given me favor in both camps.

"Roman Bapti-Costal"
All of my Christian "walk" I've been able to cross denominational "boundaries" and I count it a great blessing. Guess it might be because I am a "Roman Bapti-Costal". Let me explain, I grew up Roman Catholic, got my foundation in a Baptist church and became a Pentecostal. I don't care how it happens. What's important is finding the common denominator Jesus and the Bible, no matter what Christian denomination.

I probably ought to correct my "Roman Bapti-Costal" to read something different. When I was chatting with one of the pastors in Finland, we were talking about our backgrounds. As I was talking about mine, I realized that the first actual Protestant church I regularly attended was a Swedish Lutheran church on Bel-Red Road in Redmond, Washington. So would that make me a "Roman Swedi-Luther-Bapti-Costal"? I guess so but what a mouthful.

3,000 of My Closest Biker Friends
Once in while God blesses us with a really fun ministry thing to do. On this trip it was to ride with the Espoo Chapter of the Gospel Riders of Finland to the unofficial motorcycle season opening rally in Turku, Finland.

During my time in Finland last September 2010, I used a translator named Mika Saarinen, who also happened to be the National President of the Gospel Riders of Finland. We started talking about motorcycles and I mentioned that years ago I used to ride a BMW when I lived in America. He suggested that I come back to Finland in May 2011 and go on a national ride. I already knew I was coming back for some already scheduled meetings during that same time but I didn't have a motorcycle to ride. He offered his BMW immediately and arranged for me to borrow some riding stuff. So not wanting to "hurt his feelings", I "accepted immediately". After all it was the only "polite" thing to do. Anyway, I had no idea what I had agreed to.

Mika mentioned that riders from all over Finland would ride to Turku and gather at the local Sports Center. Then they would ride as a parade to Lieto, a small town nearby and attend a Drive-In Church Service at a local Lutheran Church. Sounds like fun. He mentioned that we would pass out tracts and "Biker Bibles" to those who wanted them. Sounds great.

Just a few days before I was to depart for Helsinki on this trip, I emailed Mika and asked him for some details on the motorcycle ride. He replied that it would involve about a 185 mile round trip ride and that they were expecting about 1,000 bikes to show up. I thought the number in his email was a typo. He confirmed it again. WoW! As it turned out the local news reported 2,000 bikes, 3,000 riders and about 1,000 spectators that lined the highway from the city of Turku to Lieto, 8 miles.

The Turku Rally and Drive-In Church service originated 31 years ago. Not all riders are Believer's but nearly all of them rode to the church for the outdoor service. It took about 90 minutes to get all 3,000 bikes moved from the Turku Sports Center to the church.

Praise & Worship filled the air of the parking lot as all the bikes filed in to park. Once everyone arrived, the service began. We heard a sermon, some scriptures and it ended with Communion being served to anyone that wanted to partake.

About 200 of the 1,000 members of the Gospel Riders of Finland came to the event. We passed out tracts and the Biker Bibles as we engaged in casual conversation usually centered around our common bond, motorcycles.

It was an incredible, once in a lifetime event to attend. I will never forget seeing so many bikes in a parking lot, all wheel to wheel and handlebar to handlebar. It was amazing. The Gospel Riders started 30 years ago and now have country chapters in Estonia, Switzerland, Spain and in Jerusalem.

This ride turned out to be the beginning of a terrific ten days in Finland. Fortunately or unfortunately it also re-awakened my love for motorcycles.

God continues to amaze me as He uses me to speak for Him to these people and country that loves Him. It is truly a blessing.

I continue to write my magazine articles for the Finnish Christian Men's magazine, Tosimies. The series on Leaving a Legacy has been published for 18 months now. The June issue will also include a two page article written and photographed by me on Turku motorcycle ride.


Posted by Lawrence Blakeslee at 13:31 0 comments

On 3 June, I celebrated my ninth year in Europe. I arrived at Bonn/Cologne Airport with luggage and extra baggage that was not shipped over earlier. "My goal" was to be overseas about two or three years. Guess I passed that goal. It's actually kind of amazing when I think of it. "Who wudda thunk it!"

After living nine years in Europe, somethings are easier and somethings are harder. Either way, I am glad that I did it and have no regrets. Yes, there were times that I wished my family was a bit closer. When I left Phoenix my oldest granddaughter was still a baby, now she's 10 1/2 years old. I didn't even have the other two yet that came a little over three years ago and two years ago.

The obvious question is "What's next?". I don't know exactly but my Heavenly Father does. Yes, I have some ideas and plans for the next few years. I am always dreaming or thinking about things. I never lack ideas just sometimes the money to implement them.

Without a doubt there is one over arching thing I have found out while serving God as a missionary. God is faithful. The list is too long to cite the many ways God has provided for me during this time. Yes, there were and are times that I wondered "if & when" but in one way or another, He always either provided, showed me that it wasn't necessary or my timing was off. For now, I'll just keep going forward, listening for direction from the Holy Spirit for His next steps for me.

It's been an adventure and I am pretty sure that it will continue to be so serving The Lord.

In The Mean Time
As many of you know, Face Book is my quick & easy way to let you know what's been going on in my life and travels. You can "Friend" and find me as "Larry Blakeslee". Since it's been awhile since I've actually posted on my blog I thought I would take the time to catch you up.

Christmas "Turkey"
Not what you think. Actually I had "Christmas Chicken" in Turkey. Someone blessed me with airfare to visit some friends and fellow Americans in Turkey. They pastor a church there. Other than a short stop years ago with the military, this was my first real time in that country.

It was great to get out of the snow and cold in Germany and to wear shorts and t-shirts at least part of my time there. Although it did get "chilly" a few days in Turkey too.

I love history and that kind of stuff. One of the most incredible things I got to do was to spend the entire day touring Ephesus and other historic sites on the drive there. It really makes the Bible in more alive when you know that you are walking where our spiritual forefathers walked and talked. It was amazing. Every Christian should try and go there sometime. 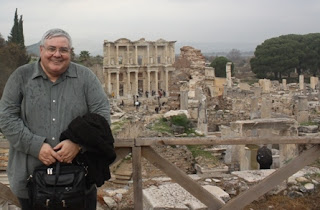 In the pic above it had been sprinkling on and off all day. Then it finally started to really rain when I got in front of the Library of Celsus. It was built in 117 A.D. We all ran for shelter as it began to become a down pour.

Back in Bonn
With my mini vacation complete and refreshed, it was time to get back to my admin project for the ministry. The first quarter of the year was spent updating stuff. Doing some praying, planning and brain storming for the ministry in 2011 and beyond.

Posted by Lawrence Blakeslee at 19:08 0 comments