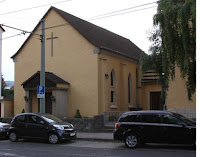 What an incredible time of ministry in Jena, Germany. I was at Christus Gemeinde pastored by Mark and Sandi Copper. The weekend started off with a seven hour, pleasant train ride that had very few train connections but a myriad of stops for the first three hours of travel.

By accident, I happened to pick the slowest train possible for the first half of the trip. It was a "milk run" commuter train that stopped about every seven minutes, at literally every stop from my station to my first connecting train stop 90 miles away in Mainz.

After I realized my mistake, I just relaxed and enjoyed the ride. No amount of wishing would make the train move any faster or get me there sooner. As it turned out it did give me time to read, listen to my iPod and enjoy a beautiful early summer day train ride.

About four hours into the trip, I crossed over the former East/West German border. As you enter into the old East German region, you can still see many differences between the East and West. The East continues to improve but slowly.

Saturday, Pastor Mark and Sandi took me to church to get ready for the morning sessions with the children. On Saturday, I did the Kids Prayer Program and Sunday preached in adult church. 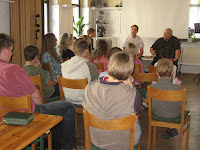 The Copper's were concerned that because summer vacation had started the day before, they were not sure how many kids would attend. They have a small church so we were pleasantly surprised to see about fifteen kids and ten adults show up for the meetings. We even had adults who were not parents show up. They just wanted to sit in on the class. The classes went great. By the end of the morning, they all had learned something, had a few laughs and found out how much God really loves them.

The Sunday service was unbelievable. Worship was incredible and everyone could feel the presence of God in the service. Instead of doing my sermon first, with permission from Pastor Mark, I switched to praying for people right after worship and then sharing some remarks about how God wants to have a deep relationship with us.

Nearly everyone stayed around after the service just to socialize. It turned into a great unplanned fellowship. I think everyone was blessed. I know that I was. God is faithful and good.

Monday, I was back on the train to head back home to Rolandseck. It was another beautiful day out to enjoy the ride back.

Posted by Lawrence Blakeslee at 13:15 0 comments

On the evening of 2 June 2002, I boarded a Lufthansa jet in Phoenix for an overnight, trans-Atlantic flight to Germany and the start a new chapter in my life as an overseas missionary.

It is amazing that I am starting my eighth year. God has given me an incredible opportunity in so many areas. He has given me opportunities to be a blessing and be blessed. Leaving the security of nearly ten years with a company and job that I loved, leaving family, friends, moving to a new country, new culture, unfamiliar language and starting a new life will test the best.

Why?
Why did I do it? It had to be God. Timing is everything. Well God's timing is really everything. It was a part of God's plan for my life. During the past seven years, God fulfilled a number of my dreams. Plus He gave me new ones. He allowed me minister in countries beyond my imagination. Minister to people groups that I never thought I had a heart for until I got there. Guess He knew.

A Growing Extended Family
Leaving my two adult natural sons and at that time, one granddaughter in Florida was tough. But God would expand my extended family with new "sons, daughters and grand children", all with a variety of ethnic backgrounds. It has been remarkable. 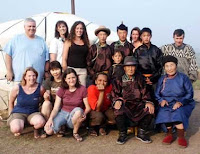 Has it been worth it?
I would say emphatically "Yes". Everything is a learning experience if we allow ourselves to go through the process. We can learn a lot about our God and ourselves.

At the Airport
With luggage and boxes piled high at the airline check-in counter, I turned to my best friend David and told him, "I'll either be back in six days, six weeks, six months or six years." Either way, I need to do this while I'm young enough and avoid the regrets of not following my heart, later in life. I can honestly report seven years later... no regrets. 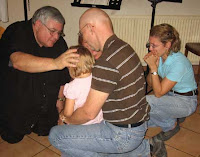 Change
In biblical numerology, "seven" is God's number and the number of completion. "Eight" represents new beginnings. My goal was to be on the mission field for five years.
Earlier this year, when I was itinerating in the America, I had a string of connected prophecies from unconnected people. They all spoke about upcoming change during the next phase of life and ministry. It is two years past that goal and I wonder what God's plans are for me as I start my eighth year.

What Have I Learned?
Whatever the upcoming years bring, in the deepest part of my spirit and soul, I know that I can trust my Heavenly Father. He is faithful. He is with me as we go forward together to fulfill His plans for me. I know that the Holy Spirit will guide me as He has done in the past. 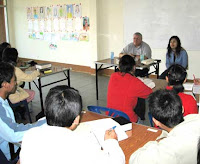 It is what a loving father does for His children. The Word talks about planting for the future but living one day at a time. Well Carpe Diem.

A Special Thanks
Thanks and blessings to those friends, both Believers and non-Believers that have stood with me these years. Thanks to those that supported me both prayerfully and financially. Your faithfulness is remarkable. Let's continue to link arms and go forward into a challenging and promising future.
Blessings,
Rev. Lawrence Blakeslee
Missionary to Europe and Asia

Posted by Lawrence Blakeslee at 19:36 0 comments